I take pride in the Business code of 5F's and do my best to be: 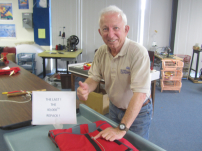 Silver Parachute Sales & Service is dedicated to providing in-depth, personal parachute service to aerobatic and glider pilots around the world. I specialize in pilot emergency parachutes and am the largest dealer of the SOFTIE line of pilot emergency parachutes by Para-Phernalia Inc. I also mfr. the popular AcroBelt a five-point ratchet seatbelt system & SMAK PAK survival kits

kits that attach to your parachute

emergency bailout training and safety seminars for pilots         around the world. 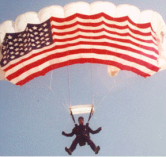 Allen Silver owns and operates Silver Parachute Sales & Service located in Sonora California. It is located about 1 hour from Yosemite National Park. He relocated his business here in October 2012 after spending over thirty years in Hayward, CA. Don't get Sonora cofused with Sonoma, CA. Sonora is in the heart of where gold was first discovered in California in 1849. My license plate frame says: Sonora Not Sonoma. Gold Not Grapes.

I've been an FAA Master Rigger since 1974 and in 1991 was designated as a Parachute Rigger Examiner for the FAA. A position I held until moving to Sonora. I also served three terms as the chairman of the Parachute Industry Association (PIA) Rigging Committee, a worldwide organization that represents the parachute industry.

Having spent 25 years with the California Air National Guard, I retired in 1991. Eighteen of those years were spent as a Survival Equipment Technician working with parachutes, liferafts, and other life support equipment. This background has been beneficial in obtaining contracts with NASA and other aerospace companies requiring services for sophisticated and specialized parachutes.

In 1962 at the age of seventeen, I made my first parachute jump in Southern California after watching the old television series Ripcord. I now have over 3200 parachute jumps as a sport and professional skydiver.

After 55 years of jumping, and not missing a year, I decided to retire, in 2017, and spend more time inside the aircraft. It was a GREAT JOURNEY.

For three seasons I performed a wingwalking/skydiving routine at airshows throughout the western United States with Eddie Andreini on his Super Stearman. I returned to flying and have over 1900 hours of which more than 1200 are in a Marchetti SF-260. I also enjoy swimming, hiking, scuba diving, photography and a good glass of wine or two.

Office Hours: Semi-Retirement is great. Call between 10:00am - 4:00pm (Pacific Time) If I'm out flying or sleeping in when you call please leave a detailed message.

I do listen to my messages

frequently and will return your call as soon as possible.

Shipping address is on the Contact /Shipping Info page.